If you would like to join me on my new travel adventure to Morocco, Spain and France, please go to this link:

Taliesin West is a number one tourist attraction in Scottsdale, near Phoenix. When you take a 90 minute guided tour of this property, you learn a lot about America’s most famous architect: Frank Lloyd Wright  (1867-1959). He thought of Taliesin West as a home, workplace, and architectural laboratory. Wright and his apprentices built Taliesin West out of the stone and sand that surrounded them in the Sonoran Desert. Many of those apprentices who worked and lived alongside Mr. Wright still live at Taliesin West. Wright’s philosophy was to built in harmony with the land respecting the nature.

Here is one of his most famous projects:

With the picture of the “world’s most famous fountain” on Fountain Hill in Scottsdale, I am finishing this part of my travel blog. I would like to say thank you to all my nice readers for joining me on this journey. Thank you for your comments and support. It is time to go back to work and to our cold Canadian reality. See you next time!!!!

One more time our great Best Western hotel. One of the best ones we have ever visited.

Then some gorgeous houses not far from our hotel

If you enjoy hiking, here is a good guide:

And another nice hiking trail, not far from the hotel, called Hieroglyphic Trail, you can read about it on p. 192

One hour-walk to see a small pool and many petroglyphs. They are believed to have been carved into the rock by the Hohokam people, as many as 2000 years ago.

Do you see the ancient carvings?

Saguaro Fact #6: A saguaro may live two centuries and be 30 or 40 years old before it is mature enough to bloom. During its life a saguaro may produce 40 million seeds but will be successful if only one grows to replace its parent.

Hello my dear blog readers. If you ever plan a trip to Phoenix, there is a place I would like to recommend: Gold Canyon. It is a small modern town, very close to Phoenix, and to the Superstition Mountains. You can take day trips from here. The Best Western Gold Canyon hotel is very good, offers full breakfast and has a swimming pool and a hot tub.

The following pictures are very dramatic because of the thunderstorm we had a chance to witness in Arizona. Here is our hotel:

We went outside to take some pictures of the neighbourhood. As you can see, we couldn’t go too far but the pictures came out very interesting.

It was a beautiful game of colours with thunderstorm clouds in the background in front of us and the sun shining behind us.

This skinny plant’s name is Ocotillo and it is in bloom in Phoenix.

I cannot stop talking about this plant. I am in love with it. I love taking pictures of them and read about them. They are impressive:

They make each landscape look exotic and interesting.

They are tall and handsome.

Today, I would like to write about their fruits. The following pictures come from Google Images. I would not be able to take them because we are never here when Saguaro blooms and has fruit.

Saguaro Facts #5 Saguaro flowers-big, bold, and numerous-bloom in late April, May and June. Each blossom opens in the cool of the night a few hours after the sunset. By the next afternoon, the flower has wilted and the brief period of bloom ended. Imagine, each one of these gorgeous flowers blooms for only several hours, at night.

The spectacle repeats itself night after night for about four weeks until as many as one hundred flowers have appeared on each Saguaro.

Why at night? Because they are pollinated by flying night animals, especially by bats.

In June and July the fruit of the saguaro ripens. The sugary pulp of each fruit contains as many as 2,000 seeds. Many animals and birds feast on the fruit and seeds. They were also very precious for ancient people who lived in this region.

A long stick is needed to reach the fruit. 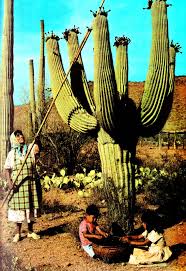 Local people cooked down saguaro fruit into syrup and made cakes from the dried seed. They made wine from the syrup. In July, after the harvest, they would use the wine for their celebration of fertility. We can easily guess that nine months later, many babies would be born.

First a beautiful sunrise seen from the balcony of our hotel.

This hiking trail took us three hours. It was very warm and sunny, a nice change after three rainy days. We came back to our hotel exhausted but happy.

Many ambitious younger hikers were trying to climb on top of that peak called the Flatiron.

And let us finish this post with a song:

Saguaro Fact #4:  Life is hard for saguaro seeds, produced by the fruit just in time for the summer rainy season. The seeds need summer rain in their first few months in order to sprout, then a series of seasonal rains for two or three years in order to establish themselves. The plants cannot tolerate freezing temperatures for more than a day and do not grow in areas that receive less than two inches of rain in summer. Good crops of saguaro may come only a few times in a century.

This is NOT Grand Canyon!

Our colours are very similar!

Of course it was necessary to buy a necklace from this Navajo salesman.

My dear friends and blog readers. I hope you have enough patience to watch the next sets of pictures. It was a breath taking experience and I would love to share it with you.

I am talking about the Apache Trail. “President Theodore Roosevelt called this 150-mile drive ‘the most awe-inspiring and most sublimely beautiful panorama nature ever created’. A stretch of winding highway, the AZ 188 portion of the Apache Trail closely follows the route forged through wilderness in 1906 to move construction supplies for building the Roosevelt Dam, which lies at the northernmost part of the loop.” Fodor’s Guide.

The most fascinating part is the 22-mile unpaved stretch of the trail. I took 300 pictures there, it was impossible to put the camera away.

It all begins here, right beside the Roosevelt Dam:

The trail goes along the Salt River and the canyons this river had created.

Saguaro Fact #3:  A tall Saguaro plant with six or seven arms can weigh as much as 14,000 pounds – the equivalent of two Hummers filled with two families and camping gear.

It is an amazing sight. The lake/reservoir is formed by Theodore Roosevelt Dam built on the Salt River in 1911. We remember that river from yesterday’s post on the Salt River Canyon.  It is located 130 km from Phoenix. Roosevelt Lake is a popular recreation destination.

Saguaro Fact #2:  A saguaro may contain two tons of water. Ribs or folds give them structural rigidity, provide  more surface area for photosynthesis, and allow them to expand and contract depending on how full they are of water. During droughts they can dehydrate up to 80 percent and still survive.  Roots may dry, too, and develop a hard cover in order to keep moisture from escaping. Then, when rain does come, the plant will send out new roots-rain roots-within hours and harvest all the water it can. A thirsty saguaro can rehydrate in a few days.

This steel bridge was completed in 1990.

Built in 1911, the Roosevelt Dam is the largest masonry dam in the world. Modified in 1995, 77 feet was added to provide increased water storage and flood control for Roosevelt Lake.